Although hits were hard to come by in the early stages of the game, Tennessee (19-15, 4-11 SEC) scored three runs in the third inning and held the Bulldogs (15-22, 5-7 Big South) scoreless through the first seven frames.

Designated hitter Luc Lipcius and second baseman Jeff Moberg led the way offensively for UT, each going 2-for-3 at the plate with an RBI.

In the bottom of the third, Moberg got the Tennessee offense going with a double to the right field gap to advance outfielder Matt Waldren to third. Waldren then put the Vols on the board, scoring on a passed ball. Luc Lipcius added to the lead with a single to left center that brought home Moberg, and Jordan Rodgers scored on another passed ball to put the Vols ahead, 3-0.

Dom Thornton increased the lead to 4-0 in the sixth, tagging up from third on Waldren’s deep fly ball to left field.

With two outs in the top of the eighth, an errant throw by Linginfelter to first base allowed Joe Tietjen to score from second, cutting the deficit back to three for UNC Asheville.

Moberg singled in the bottom of the eighth, bringing home Max Bartlett to make it 5-1 in favor of UT. Moberg’s 21st RBI of the season ties him with Rodgers for the team lead.

In the ninth, the Bulldogs’ Tanner Bush hit an RBI single to center field, scoring Joe Gruszka to bring the score to 5-2.

The Bulldogs came knocking on the door in the top of the third, loading the bases with just one out. However, Freeman worked his way out of the jam, throwing a strikeout and forcing a groundout to second that stopped the scoring threat. 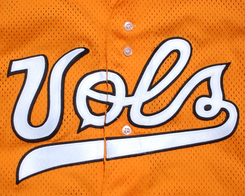