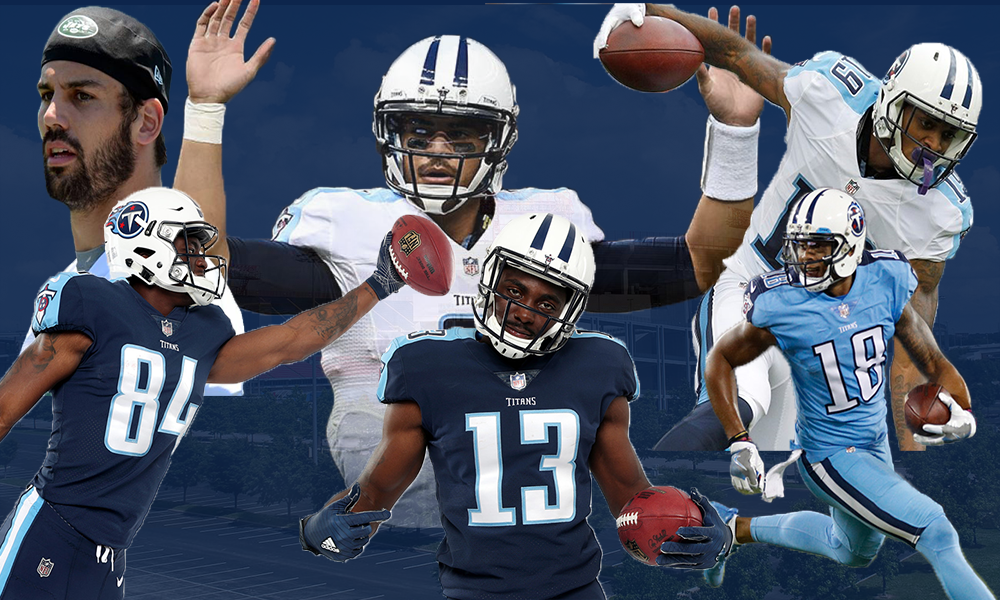 The Tennessee Titans top the list of most improved receiving core in the league for 2017.  The additions of Corey Davis, Taywan Taylor, and Eric Decker certainly put a spot light on the Titans receiving core.  However, its the second year return of two receivers that push the Titans into first place.

General Manger Jon Robinson made his message clear in the 2017 draft by selecting two wide receivers in the teams first three picks. He later added some insurance by signing season veteran Eric Decker as added talent.

The Titans started their 2016 Spring Camp looking to develop receivers.  No one would have expected that one year later, on paper, they would have more talent than they could play.

Why Titans Receiver Core Most Improved In NFL

The 2016 season was Matthews first season with quarterback Marcus Mariota and the Tennessee Titans.  The Titans ranked 29th in pass attempts yet Matthews nearly recorded a 1000 yard season.

Davis was the Titans #1 Draft pick and 5th overall in the 2017 draft and for good reason.  His college stats across the board put him as the #1 NCAA reciever since the 1950’s.  His size and speed give him the potential to be a top five receiver in the NFL.

Eric Decker is among the most productive #2 wide receivers in the NFL in the last seven years.  He brings a veteran quality to a young squad and has many years left to play.  Decker’s family lives in Nashville due to his wife’s occupation.  Translation: Being on a one year contract, you can bet him will elevate his game for a 2018 extension.

Taylor tops our list for steals in the 2017 draft.  Again, his college stats put him in the top 20 receivers since the 1950’s in the NCAA.  How he was still available in the third round is still a mystery to us.

With the drastic improvement of the Titans wide receiving core, one must remember Sharpe was a big steal in the 2016 draft.  He began 2016 very well though some rookie mistakes started showing through.  Now that Sharpe has his rookie year behind him, and some chemistry with Mariota, do not count this talented receiver out.

Titans QB Marcus Mariota has to be ecstatic going into the 2017 season.  He has an outstanding line, a pro bowl tight end, a big time running game, and a receiving core loaded with talent.

Marcus ranked #1 in the NFL in 2016 for quarterback efficiency with a +25.9 rating.  He did this with two first year wide receivers and ranking 29th in the league for pass attempts.  Add in Mariota’s mobility and two years experience and it seems to be a pick your poison scenario.

Having a seeming “overly talented” receiving core can only mean great things for the Titans in 2017.  Each receiver will certainly elevate their game competing for a spot all the while giving the Titans depth for a long season.