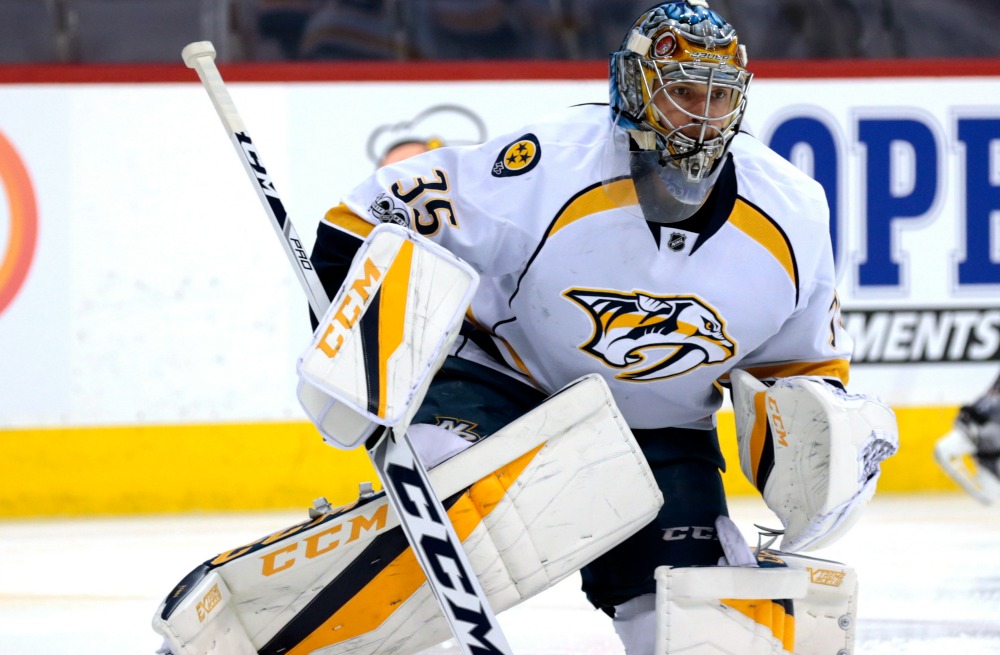 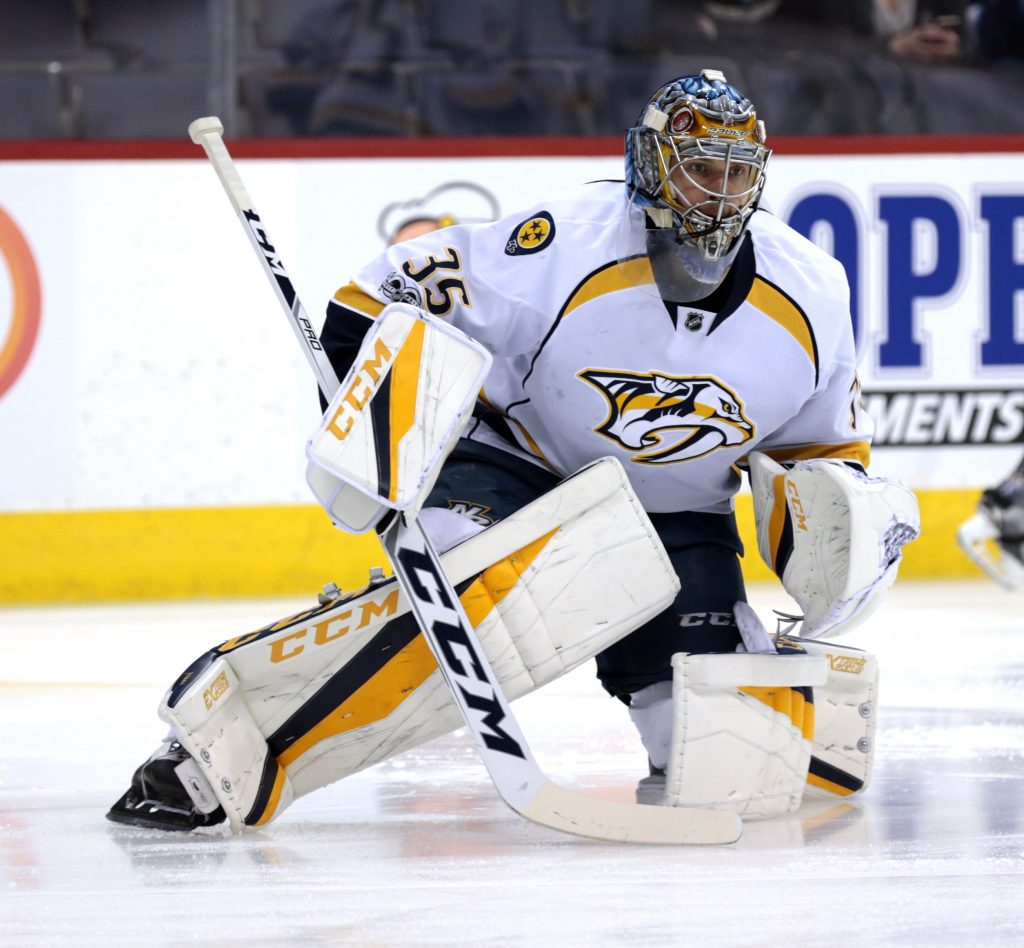 Pekka Rinne didn’t give the Chicago Blackhawks a single thing.

The veteran netminder made 29 saves as the Nashville Predators took Game One from Chicago by a 1-0 final on Thursday night at the United Center. The victory gives the Preds a 1-0 series lead in the Round One matchup with Chicago, and the first road playoff shutout in Nashville franchise history.

“Now the series is on,” Rinne said. “You have to remember it’s just Game One, but any time you want to get off to a good start and start the series the right way, it obviously feels great to be up 1-0. But now they call it a series, right?”

It was perhaps the most likely candidate who struck first for Nashville at 7:52 of the first period. Viktor Arvidsson tapped in a brilliant feed from Filip Forsberg at the top of the crease, beating Corey Crawford for a 1-0 lead. After staving off an early push from Chicago, Nashville controlled play for a majority of the 20 minutes, finishing the period with an 11-6 advantage in shots.

The second stanza brought a surge from the Hawks, outshooting Nashville by a 12-4 tally, but Rinne was stellar between the pipes for the Preds, keeping his club in front after 40 minutes.

Then, in the final frame, Nashville and Chicago went back and forth, with Rinne and his mates shutting the Hawks down until the buzzer sounded to give the Preds an early series lead.

“I guess my evaluation of the game is that the first period we were really good, second period they were really good and the third period was a competitive period,” Predators Head Coach Peter Laviolette said. “I thought our start was excellent, we did a lot of good things.

“We recognize we’re playing a good team and sometimes we’re going to have to defend, I just thought we did too much of it in the second period.”

Even with the win in Game One, the Preds say they know they have plenty more to give, and they’ll work on areas of their game in advance of Game Two on Saturday night.

“I think just focusing on us, improving our game; I think we all feel like there’s areas in the game we can improve,” Rinne asid. “we should feel comfortable and confident right now, but I’m really excited for Game Two, and I think everybody else is as well.” 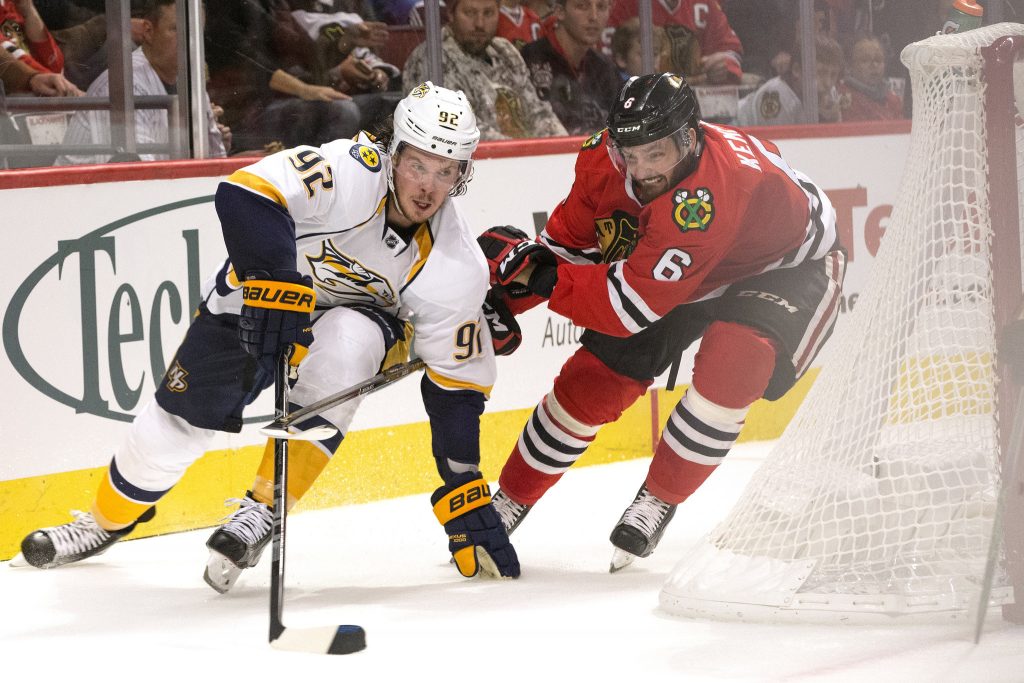 With a slew of stops, 29 in all, Pekka Rinne showed he’s still capable of stealing one in the postseason.

Including 12 saves in the second period alone, Nashville’s stud netminder kept the Blackhawks off the board all night long and led his club to a one-goal win to start the playoffs.

“Of course it feels good, I don’t want to sound too humble, but it’s still just the first game, first win and first win of the series,” Rinne said. “Tonight, we scored one goal and it had to be a shutout if we want to win the game. But I’m not [saying it doesn’t], it feels great though, it does.”

Those on and behind the bench have come to expect outings like this from the veteran puck stopper, but that doesn’t make it any less impressive when Rinne puts forth an effort such as this.

“He was amazing,” defenseman Roman Josi said. “What a great game by him. I thought we played pretty solid in the first, played a good first period but after that they were all over us. Especially in the second, Peks made some unbelievable saves and he was great, not much more you can say.”

“Especially for not getting the work and the quality chances in the first period, the second period he was outstanding, and some big saves in the third period as well,” Laviolette said of Rinne. “Sometimes that’s difficult, to not get a lot of work in and there were some shots so that was good, there were some attempts, but they were from the outside. Our guys did a good job defending the interior, but in the second period he had to be really, really good.”

The first goal is usually an important one. On Thursday, it was the only one.

Nashville’s top line of Ryan Johansen, Filip Forsberg and Viktor Arvidsson combined for some slick work in the Chicago zone, and Forsberg placed a laser on the tape of Arvidsson for the easy tap-in tally.

“I thought that this year he’s been one of our top guys and really a breakthrough season for him,” Rinne said of Arvidsson. “He was really strong – like he’s been all season long – and we’re going to need him moving forward too.” 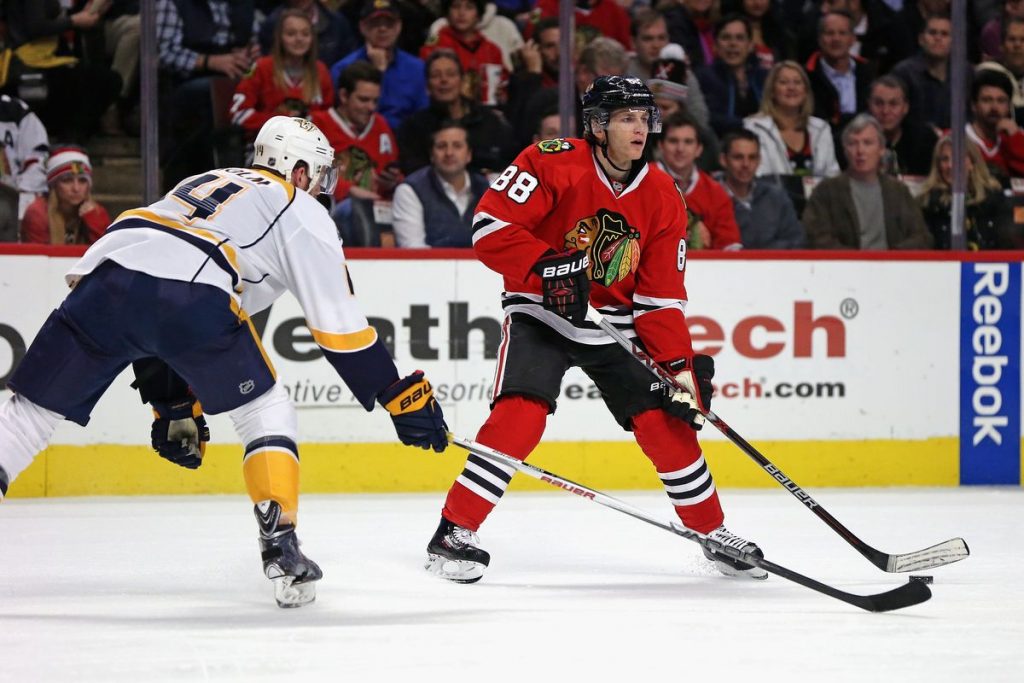 With 29 saves, Pekka Rinne became the first goaltender in franchise history to record a shutout on the road in the postseason.

Nashville blocked 26 shots in Game One to Chicago’s 12. The Preds also outhit the Hawks 37-33.

Game Two between the Predators and the Blackhawks comes Saturday night at the United Center before the series shifts to Nashville for Games Three and Four, beginning on Monday night.