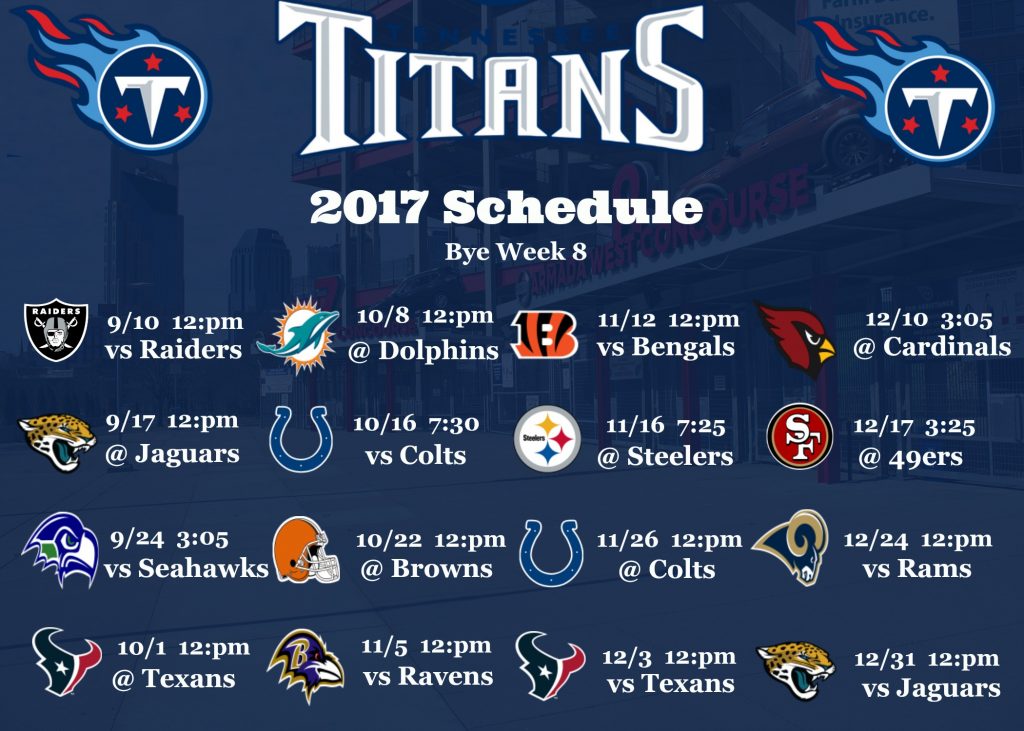 The NFL released the 2017 NFL schedule Thursday and the Tennessee Titans should have been happy with what they saw.

There are several things to look for when looking over the schedule for the year playing out your weekly situations, positions of your team.

Normally, you would prefer Divisional match ups to start in October, if you could pick.  But from the Titans perspective, these two Divisional match ups come at the best time.  The Jags in week 2 give us a great opportunity to get a Divisional win early.  The Texans are having quarterback issues and it would be best to play them early on before they find a stride.

Our bye week is a big deal.  You do not want it to come to early or late in the season.  This gives the team an opportunity to get healthy.  Week 8 Bye is as good as it gets.

We can only judge the coming year from the previous year and as we know, teams can be a lot better than expected.  That being said, on paper, the titans will be heavily favored in six match ups.  This is not including the Texans who we believe will struggle this year on offense.

The Titans should be able to add to their wins a little easier through December giving them momentum going into the playoffs.

Yes we are talking playoffs for 2017 in April.  The Titans came into last year not knowing who they were after three horrible season and managed to win 9.  If you take the same personnel and play it again we go to the play offs. Now add Coach Mularkeys 2nd year, J-Robs 2 1st round picks, the culture change being a reality and not just a quote, expectations are high and lets face it, not making the play offs would be a huge disappointment. No Pressure.

The truth is the Titans are an abundantly talented team that is now being led by a great coaching staff and a GM that comes from the Patriots.  There should be high expectations.

Tickets will go fast this year so get them early.