Undefeated Alabama traveled to Auburn to take on the #6 ranked Tigers and found more than they could handle. Auburn Beats Alabama 26-14.

The Iron Bowl had all the pregame signs of another Alabama victory.  However, no-one told the Auburn Tigers that.

Auburn took nearly every statistic in the game including 408 total yards to Alabama’s 377.  While nudging Alabama in all areas, they key to Auburns success was time of possession. 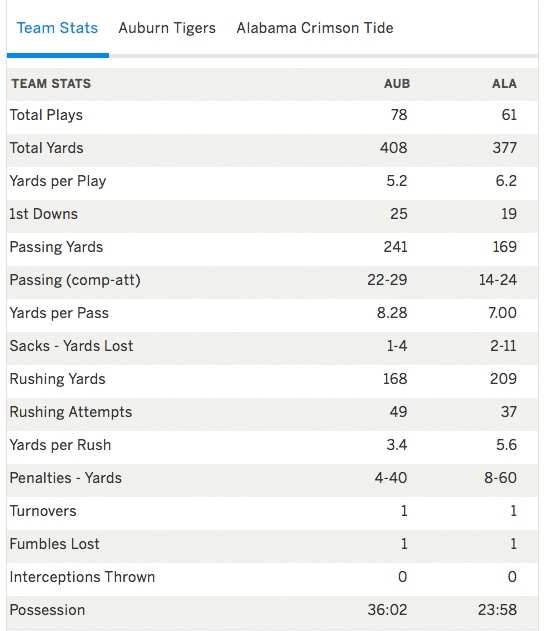 The Tigers controlled the ball 36:02 compared to Alabama’s 23:58.  By doing so, the Tigers kept the Alabama offense off the field as they consistently worked time off the clock.

In the fourth quarter, the Auburn Tigers defense took QB Jalen Hurts scrambling impact away forcing him to throw it.  In tight spots the Tide always gets Hurts to drop back and run.  The Auburn Tigers knew this as well and made it a non factor.

The Crimson Tide seemed to be out of sink as Alabama’s center snapped the ball twice in a row with the QB not ready.  This was done late in the fourth on 3rd and fourth down.

On the fourth down miscue, the Crimson Tide caught a break with 12 men on the field for Auburn.  They were unable to capitalize as the receiver ran the route short for the first down.

Beat No. 1 Alabama ☑️@AuburnFootball has beaten the No. 1 team in the country twice in last 3 weeks. pic.twitter.com/pK1J9mVF5J

The entire night was completely uncharacteristic of Alabama but that what prepared teams create.  Auburn spent the night putting Alabama in situations they were not custom to.

Alabama’s loss created quite the ripple effect through out the National Play off picture.  The committee will have their work cut out for them as they now decide the fate of teams such as Ohio State.