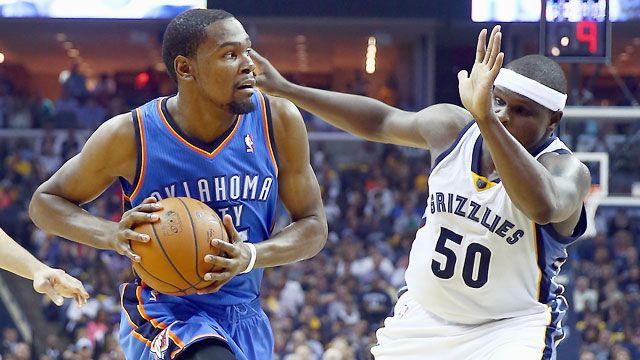 Westbrook scored 29 of Oklahoma City’s 46 second-half points but finished one rebound shy of his 42nd triple-double of the season, which would eclipse Oscar Robertson’s NBA single-season record set in the 1961-62 season.

The game featured 14 lead changes (eight in the fourth quarter), but Oklahoma City held a 26-13 advantage in fast break points. Despite committing a similar amount of turnovers (Memphis 14; Oklahoma City 12), the Thunder scored 25 points off turnovers to the Grizzlies’ 12.

Zach Randolph (17,704 points) passed Shawn Marion (17,700) for 76th in NBA history for points scored. He finished the game with 20 points and nine rebounds, marking his 10th game of the season with 20-or-more points.

The Grizzlies used their 24th starting lineup of the season and are now 11-6 on the second night of a back-to-back this season. The Thunder won the season series, 3-1. 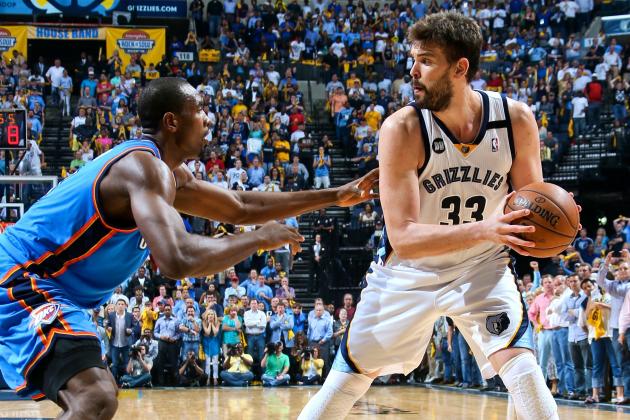 The Grizzlies move on to part two of their four-game home stand to finish the season, taking on the New York Knicks Friday at 7 p.m. CT. Come out to support the team live at FedExForum, tune in to FOX Sports Southeast, presented by Pinnacle Financial Partners, or listen on 92.9 FM ESPN. 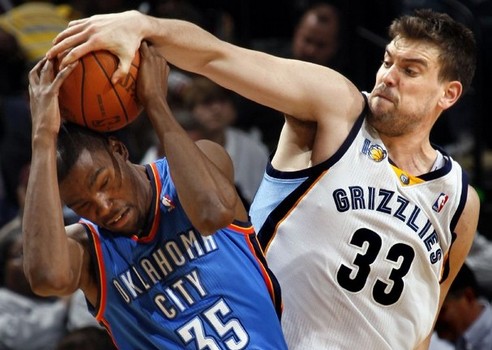 On changing coaching style of the remaining regular season games…
We still have got to play basketball right now. I am seeing things I really like. I thought our two young point guards [Wade Baldwin IV and Andrew Harrison] played a solid basketball game without Mike [Conley] on the floor against, obviously, an incredible basketball player [Russell Westbrook]. When he is hitting threes like that, I don’t know what you do. I really thought our young point guards really competed and Wayne Selden really did a great job. Overall, it really came down to a couple minimal mistakes. I’m trying to get our team to understand that you are already in the playoffs. That was a playoff game. I think you can tell by the physicality of it. That game was a playoff basketball game out there. Every mistake that you make out there is really going to be highlighted. These teams are really battling for it.

On encouraging losses by close margins…
It’s all close games right now and no matter who is on the floor for us, we are getting it down to a possession here or a possession there. That’s why I am not disappointed. I hate losing, don’t get me wrong. But right now we are trying to build something so we give ourselves a chance to win a series. Our competitiveness, focus for about 45 minutes right now, our offense is solid for big stretches of the game now. The ball is moving and we are sharing the game, it’s just that we’re not getting over the hump at the end of the game. I’m going to look at myself hard and see how I am coaching late-game situations. We will get there if we just keep grinding. The guys in the locker room are really staying together and understanding the process so I think we will be okay.

On Russell Westbrook…
He’s definitely MVP worthy. He was the aggressor. For the most part, paying attention to detail and loose rebounds kind of got the best of us down the stretch as well. He also had a lot of turnovers as well. I thought we did a good job of forcing that, but he was the aggressor down the stretch. It’s going to be a playoff-style of basketball for these next three games, and we’ve got to buckle down on paying attention to detail.

On what the team can learn from the last few games…
[We need to understand] how critical each possession can be moving forward. If you can just stay in the moment and pretty much do your job in that moment, it will be helpful for the team, but we need to start racking up some wins and capitalizing mentally.

On guarding Russell Westbrook…
He’s a hell of a player, man. He’s really fast and everything, so you try to back up and he hit very tough shots tonight. Like my teammate said, he’s MVP worthy.

On what we can learn from the last few games…
I think we are getting better in some things. Obviously there are other things that we need to improve, but we feel confident because we’ve got to go into The Playoffs with confidence and know what our strengths are and our weaknesses. I think we have to try to hide them a little better.