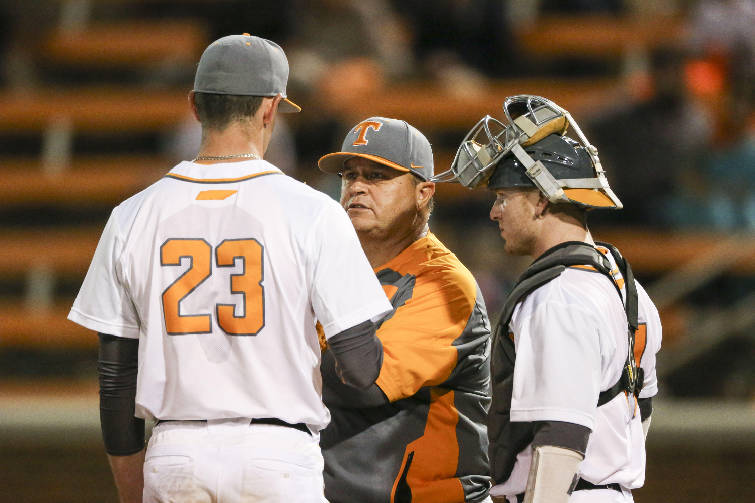 KNOXVILLE, Tenn. — Tennessee’s pitching staff combined for nine strikeouts against No. 10-ranked Auburn, but the Tigers plated eight runs on 11 hits to take a series-clinching win, 8-1, on Saturday at Lindsey Nelson Stadium.

Offensively, left fielder Justin Ammons led the Volunteers at the plate with a 2-for-4 effort. His hit up the middle in the bottom of the third inning marked his 12th mutli-hit game of 2017.

Third baseman Jordan Rodgers hit a homer to left field in the ninth inning to put the Volunteers on the board, marking his 32nd straight game to reach base safely for Tennessee.

Freshman and Georgia native Pete Derkay also added two knocks for UT, including a hard-hit single through the right side in the ninth inning.

In the fourth inning, Auburn plated two quick runs after not reaching base over the first three frames. The Tigers went on to extend their lead in the fifth inning to 3-0 after Bo Decker hit a home run to left field.

Another homer came for Auburn off the bat of Dylan Ingram in the seventh, increasing the Tigers’ advantage to 7-0. Luke Jarvis then pushed the game to 8-0 after scoring on a single through the right side.

Rodgers’ homer for the Vols in the ninth helped UT avoid the shutout in the series finale. His solo shot to left field furthered Tennessee’s season count to 22 home runs on the year, surpassing last year’s total of 21 over 57 games.

Starting on the mound for UT, left-handed pitcher Zach Warren completed 4.2 innings with five strikeouts and allowed four runs off five hits in the loss.

Sophomore right-hander Will Neely allowed just one hit while striking out four of his seven batters faced over 2.0 innings of work. Andrew Schultz (0.1), Eric Freeman (1.1), Richard Jackson (0.2), and Jacob Westphal (0.0) also went on to make appearances in relief for the Volunteers.