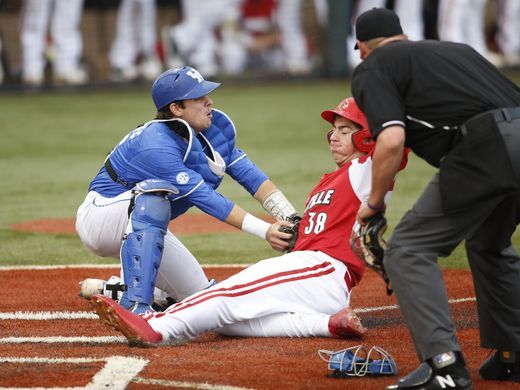 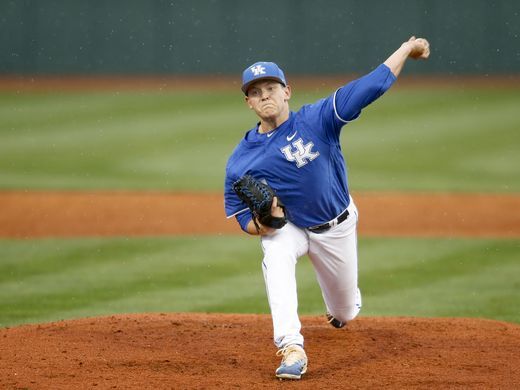 LEXINGTON, Ky. – Playing in front of a record crowd, No. 10 Kentucky came out of the gates with a five-run first inning on the way to an 11-7 victory over No. 2 Louisville in the first of four games against Top 10 opponents this week at Cliff Hagan Stadium.

The Cats (26-12, 10-5 SEC) blitzed their in-state rival for 11 runs in the first four innings, igniting the Cliff Hagan record crowd of 4,018 fans. Five consecutive RBI singles in the first inning and a four-run third capped by senior Connor Heady’s home run provided most of the damage at the plate but it was a defensive play that left everyone buzzing.

The Cardinals (31-5) put their first two hitters on base in the second inning before the Cats extricated themselves from the potential jam in the most exciting way possible. With runners on second and third, Colin Lyman lifted a fly ball to left that Zack Reks caught and fired home to nail Brendan McKay, who tagged up on the play, at the plate. UK catcher Troy Squires made the tag and quickly fired to third where Heady – the UK shortstop – had covered and gloved Drew Ellis before he reached the bag, executing a rare triple play.

The triple play is the only known one in school history.

UK did have to survive a Louisville rally in the middle innings, as the Cardinals scored two in the fifth and five in the seventh before righties Chris Machamer and Zach Pop threw water on the flames. Closer Logan Salow came in and recorded the final three outs to end a six-game losing streak in the series, including a 5-3 defeat at Louisville on April 4.

AT THE PLATE
The Wildcats pulled in 11 runs on 14 hits with just five strikeouts against the Louisville pitching staff. Tyler Marshall went 3-for-4 at the plate, with two RBI and a run while Troy Squires went 2-for-4 with three runs and one RBI. Kentucky started the game hot. Six Cats made it on base safely in the first inning, which opened up the floodgates for the five runs that started the game. UK added four more runs in the third inning, two to the credit of Connor Heady when he homered over the leftfield wall. UK plated two more runs on three hits in the fourth inning.

ON THE MOUND
Through his five innings of work and fourth win of his young career, Zack Thompson allowed just three hits and struck out seven – just one from his career-high of eight that he’s reached on three different occasions this season. The freshman didn’t give up a run until he already struck out two Cardinals swinging in the top of the fifth inning. Chris Machamer picked up a strikeout in his two innings pitched, while Zach Pop picked up two in his only inning. To no surprise, Logan Salow came on in the ninth and closed things out for the Cats.

SCORING
Bot 1st – Tristan Pompey led off with a double to right field, while Evan White was walked. Zach Reks laid down a sacrifice bunt that moved Pompey to third and White to second. Luke Becker then singled to centerfield, which drove in Pompey for UK’s first run of the game. Mahan singled to right field, scoring White from third base. Becker scored on a single through the left side of the infield from Troy Squires. Mahan and Squires then advanced to third and second on a wild pitch. Tyler Marshall stepped up and placed a ball in between first and second base, which scored Mahan. UK then called for a squeeze during Marcus Carson’s at bat, which ended up scoring Squires for the Wildcats’ fifth run of the inning. UK 5, UL 0.

Bot 3rd – Squires and Marshall both singled through the left side of the infield. Carson reached on a fielding error by the second baseman, advanced to second on the play before reaching third on a throwing error from the centerfielder. Marshall also advanced to third, but scored on the throwing error. Squires also scored. Heady homered just inside the left field pole. UK 9, UL 0.

Bot 4th – Reks, the leadoff batter, singled to left field. Becker laid down a bunt for a base hit, advancing Reks to second base. Mahan flew out to right field, but Reks tagged and moved to third base. Squires reached on a fielder’s choice, which advanced Becker to second base, but Reks was called out at the plate on a toss from the pitcher. Marshall singled through the right side of the infield, scoring Becker and moving Squires to third. Squires later scored on a wild pitch during Carson’s at bat. UK 11, UL 0.

Top 5th – Colin Lyman and Devin Mann were both hit by pitches. The two scored on a double down the right field line from Logan Taylor. UK 11, UL 2.

Top 6th – Devin Hairston and Brendan McKay both walked to start the inning. Drew Ellis blasted a three-run shot over the left field wall. Lyman added another double. Josh Stowers singled to center field, which advanced Lyman to third base. Lyman scored on a throwing error on a failed pickoff attempt from Chris Machamer. Mann flew out to right field in his at bat, but Stowers advanced to third and later scored on Tyler Fitzgerald’s groundout to the shortstop. UK 11, UL 7. 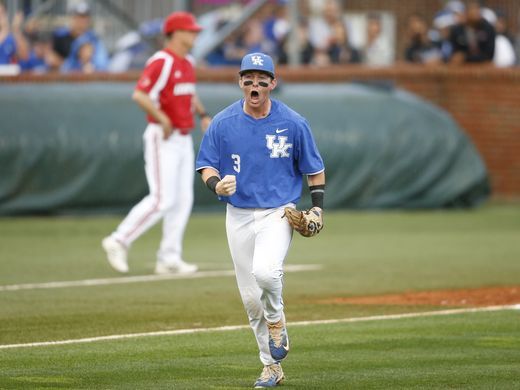 • Sophomore OF Tristan Pompey went 1-for-5 with a double and a run.

• Connor Heady hit his sixth home run of the season, a two-run shot in the third inning.

o It was Marshall’s fifth multi-hit game this season and seventh of his career.

o The 83 career appearances moved him out of tie for fourth with Jon Hooker (1998-2001) and into third place alone on the UK all-time appearances list.

ON DECK
Kentucky opens a series with No. 8 LSU at Cliff Hagan Stadium on Friday, April 21 at 6:30 p.m. Fans can listen on the UK Sports Network via UKathletics.com and iHeart Radio, as well as on 630 AM WLAP, and watch on the SEC Network+.